One man’s trash is another man’s treasure??? 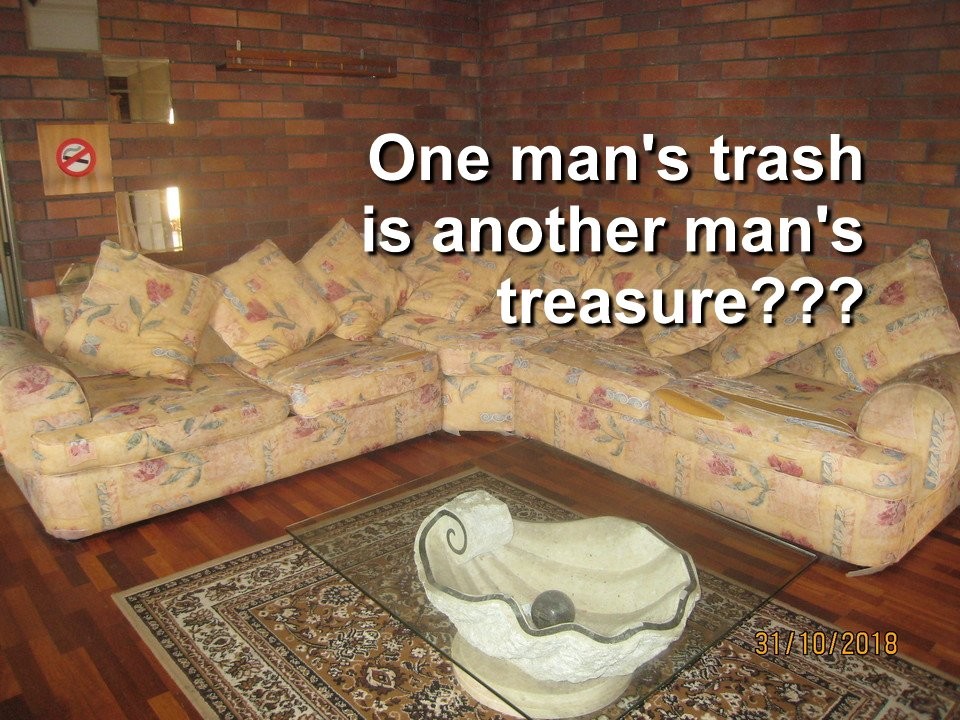 I had an interesting experience recently that I would like to share. Being an ecologically friendly person into re-use and recycling, I thought I was doing the right thing. It turns out, no one was interested! This is what happened.

I have just returned to Australia following a three year absence. For those of you who follow me, you will know that I am originally from Australia but have not lived full time in Australia since the year 2000. My intent on this trip, among other, is to sell my beautiful six bedroom, two story house with swimming pool, rumpus room, two kitchens, four door garage and a granny flat in Brisbane. I feel a little sad about it, but simply have been absent so long that I clearly have no need for it.

I had, unfortunately, not so great tenants in it. As I have been told, it is best to sell it empty of furniture, and therefore decided to giveaway whatever is inside it to those in need. Everything from TVs, pots and pans through to beds and couches. Here is where the story gets interesting. I am down to the couches. Clearly damaged by abusive tenants unlike most of the other items. I call the usual prospects: St Vinnies, The Salvos, RSPCA, LifeLine to name a few.

They all want to see pictures first, so I oblige. Then they go on to tell me that they cannot accept stained or damaged furniture: it must be in good working order as they donate them to the homeless. I say “surely you have people on hand who take care of these things so they are reconditioned before you give them away?“. Ahm… “No“. For hygiene reasons we cannot pass those on and we do not have people to do a once over. Now, let me tell you the couches are of good quality, clean, but obviously used (see above)!

As I have been living in Asia, I know that if I were to place these outside my home over there, they would be gone in minutes to someone deserving. I prod some more. “So what do you provide to the homeless?“. They tell me they provide 8000 brand new beds to the homeless free of charge. And what do they do with second hand used stuff? They sell that to people who are shall we say “more accommodating” than the homeless! In other words they sell second hand furniture to the rich to raise funds to buy new beds for the poor and homeless!

From my part, I simply do not have the space nor need and am willing to donate the items to some less fortunate people. From the support agencies point of view they cannot “afford” to give poor people used items for fear of litigation, being sued or what have you not, as the homeless may claim acquiring some form of illness from the used items. Instead, they buy brand new (in my opinion uncomfortable and overpriced) backpack beds for $95 from the proceeds of the sale of your old furniture donations.

I had offered my items at the World Biggest Garage Sale the week before, however they ran out of time to fetch them even though the items are literally five minutes down the same road as the event. If you do not like the fabric style, clearly they can be re-upholstered and the cushions changed as they are zippered. I have three sets and two have double beds inside that I am giving away for FREE (spent over $7000 when I first bought them). If you are interested, they can be picked up from Eight Mile Plains, just let me know.

Having lived and worked in Malaysia, Thailand, Hong Kong, Philippines and China since the year 2000, I have had some experience with less fortunate folks. There, poverty, hunger, shelter and the need for medications is huge and yet, they are very thankful for whatever they can scrape together or any help they can get. Clearly the homeless here in Australia should be more thankful for all the help they get as they are not as desperate.

UPDATE The final Chapter: After several weeks of advertising the set of couches for free and having no takers, we were forced to remove and dispose of them unceremoniously. A rather tragic end to what would of been a perfectly good quality set of furniture. And just to be clear, it is not the homeless per se who are not interested, but rather the bureaucracy of the social welfare system which needs to guards itself against some individuals who abuse the legal system. They do so by claiming ill health as a result of using used furniture in an attempt to extract cash from such ‘donation‘ made in good faith.