The right to repair 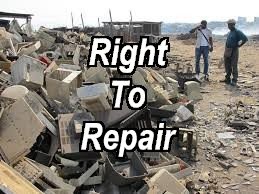 Consumerism has certainly taken its toll on society and the environment. Take all the effort that goes into mining the raw materials for the consumer electronics industry, transport of the same – often from afar – only to eventually end up dumped. E-waste – the trash we generate from end-of-life electronic devices – is the fastest growing form of waste going to landfill and this in turn is fueling climate change. This reflects a shift by manufacturers from producers to assemblers allowing them to achieve economies of scales through increased volumes at reduced costs. The sacrifice is in quality and longevity with most common household appliances lasting 9 to 15 years. Making appliances last longer and recycling materials reduces carbon emissions.

For example, a study between 2004-2012 showed that the proportion of major household appliances that died within five years rose from 3.5% to 8.3%. In another study, 10% of washing machines at a recycling center were less than five years old. And personally, I have had the experience of buying lighting fixtures with, unfortunately, ‘inbuilt’ light bulbs which cannot be changed requiring the whole fixture to be replaced. In yet another first-hand example, a friend of mine with an Epson Projector was looking to replace the bulb. Although marked in the instruction manual as a user-serviceable part, service centers, who sell the bulb, refused to offer a unit for sale. Instead they demanded he book the projector in for maintenance, whereby for a much higher price plus labour, they would provide and fit the bulb.

Attempts over the last decade to institute ‘recycle and repair’ initiatives is a step in the right direction. However, whilst more consumers have been commanding their right to repair, many manufacturers have been denying them this right. Manufacturers claim that replacing old (broken/used) appliances with newer more efficient ones is better for the environment and more appealing for the users. They also fear that having appliances user-serviceable by non-qualified DIY consumers is harmful or even dangerous. Another response from a leading industry group was that having individuals undertake their own repairs “deviate[s] from internationally-recognised best practices and compromise[s] intellectual property.”

Conversely so, ‘Right to Repair’ advocates argue that manufactures should make items recyclable and/or re-usable (re-purposed), provide adequate blueprints and accessibility to inexpensive spare parts for up to seven years. Notable examples are companies like TESLA who provide blueprints for their designs, making it possible for after-market manufacturers to make parts compatible with theirs. A few years back, Google introduced the now suspended Project Ara, an inexpensive modular mobile phone, making the user serviceability issue moot: every major component could be simply snapped in or out with a myriad of additional modules to choose from. These approaches to open innovation encourage collaboration and technology advancements whilst reducing waste – a boon for the Right to Repair movement.

Some countries have started to pass these requirements on manufacturers into law. An example is the UK where The Minister for Environment stated that the new legislation is “key to improving our productivity and making best use of precious resources”. Manufacturers say the proposed rules on repairability, forcing manufacturers to make goods that last longer and are easier to mend, are too strict and will stifle innovation. However, the complex and controversial EU-wide Ecodesign Directive is designed to significantly contribute to the EU’s 2020 energy efficiency objective.

In the USA, the Right to Repair Act is being introduced into legislation on a state by state basis, even though met with opposition by major manufacturers such as Apple and Microsoft. Australia has similar nationwide legislation forbidding manufacturers from denying access to parts or preventing third party repairs. In a notable case, back in mid-2018, Apple was fined nine million Australian dollars (AUD9m) by the Australian Competition and Consumer Commission (ACCC), after it told consumers it wouldn’t offer free servicing of their device as it had been previously serviced at non-Apple stores, effectively voiding guarantees.

The right to repair is certainly an important and pertinent issue for our times, given the need to tackle climate change, pollution of our waterways (leaching of harmful toxic heavy metals) and reduce our need for diminishing earthly resources. It also forces enterprises to rethink their approach to product and service provisioning (better design for serviceability and quality for longevity), and distribution/servicing through new business models (eg: Philips light service) aimed at addressing the circular economy.