The history of sustainability 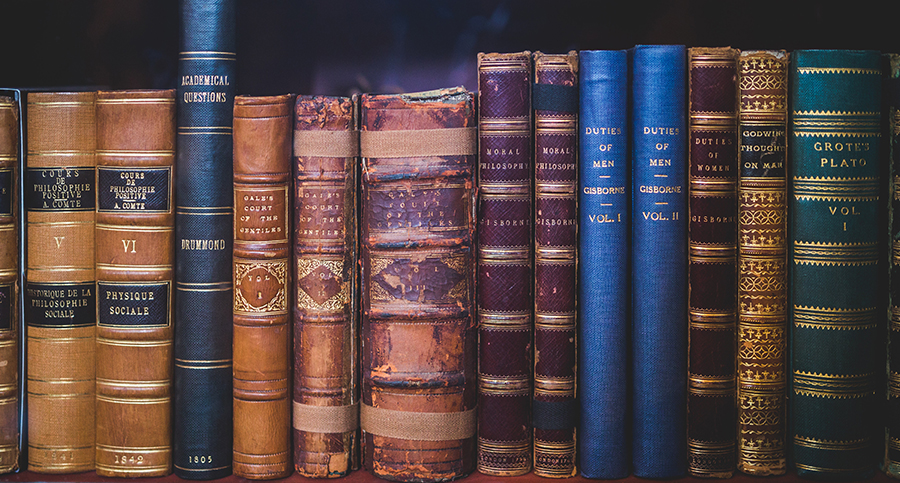 Business was invented to make our life better, or so we are told. What is clear is that much of our unsustainable issues are due to the disregard of business far and wide, the world over. Whilst business is the biggest culprit, it also represents our greatest source of redress. Traditionally the wealth of a nation has been focussed on economic performance and measured by gross domestic product (GDP). Today, such measuring stick is at best inferior and ineffective; at worst downright inaccurate and incorrect.

The journey to sustainability dates back to the 1800s at the start of the industrial revolution. It resembled more like a war between industry and the environment whereby coal was being burnt freely with no filters. The air in industrial cities in Europe and America became increasingly grey. Unconstrained by any environmental laws, industry continued to generate more air and water pollution each year for hundreds of years until, by the middle of the 20th century, the levels of pollution were jaw-dropping.

In Dec 1952 London was hit by the Great Smog. The pollution was so heavy that within days 4,000 were killed and 100,000 more sickened. Meanwhile, the USA experienced similar smog events and uncontrolled water pollution with rivers oozing with pollution and some even catching fire in Ohio in 1969. This drew attention to the problems, with citizens asking for new environmental protection laws passed to deal with the worst of the air and water pollution. America and Britain passed their first clean water and clean air acts to regulate the worst of their abuses starting in 1948.

Industry was forced to pay fines for damages due to pollution and install expensive treatment facilities. Companies who failed to comply with the law were shut down, whilst others suffered financially due to penalties. Many more moved their production facilities offshore to China or other developing countries where environmental laws were less enforced. It became apparent that protecting the environment was a cost to business, and so the battle lines were drawn between business and the environmental lobbyist.

In the 1960s, cheap production costs had got ahead of what people wanted. In response, advertisers and marketers developed consumerism, further encouraging the production of cheaper products which were sold on the market and only designed to last for a short time, so, even more, could be sold. Much of the manufacturing was happening in countries with little enforcement, so things just got worst. During this time, in Bophal, India, an industrial plant located next to one million people and ignoring safety regulations, one morning suffered a leak, releasing deadly poisonous gases in which 20,000 people died.

It was clear that government regulations alone were not enough. Business had to embrace their own sustainability challenges. In 1973 war broke out in the middle east and oil and petrol became expensive, with prices staying high for a decade. Stock markets crashed causing even further price hikes. Some business started to realize that they could use less energy to make their product and services. If people believe the company was making better products and looking after the environment and its employees, they could sell more. They chose to self-police themselves by setting up a Corporate Social Responsibility department. Philanthropic initiatives (Stage 1) included planting trees, donating to the local communities, clean up days, and changing from incandescent to LED light bulbs. All contributing to the greater good, with just small progress being made at first.

Over the years, regulations are getting stricter such as requiring the recycling of electronic products in EU regardless of where they are manufactured (Stage 2). Investors want to know the risks, through, for example, the Carbon Disclosure Project and similar initiatives. Employees want to work for companies they believe in. Candidates are also selectively looking closely at their prospective employers as well as to where they want to do business, depending on how well companies are manufacturing their products and services. 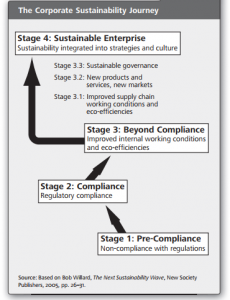 Nowadays, some companies are starting to build sustainability within the fabric of their company, moving from Stage 3 to Stage 4. A notable example is Interface, a carpet manufacturer, who have become carbon neutral, recycling 40% of their carpet materials, with an astonishing accompaniment of goodwill. Some start from inception at stage 5, deciding to be a green or B corporation such as Patagonia, the sporting clothes seller. Companies that build sustainability within their company by design are prospering, becoming more competitive, more cost-effective and resilient and thus leading the way to prosperity.