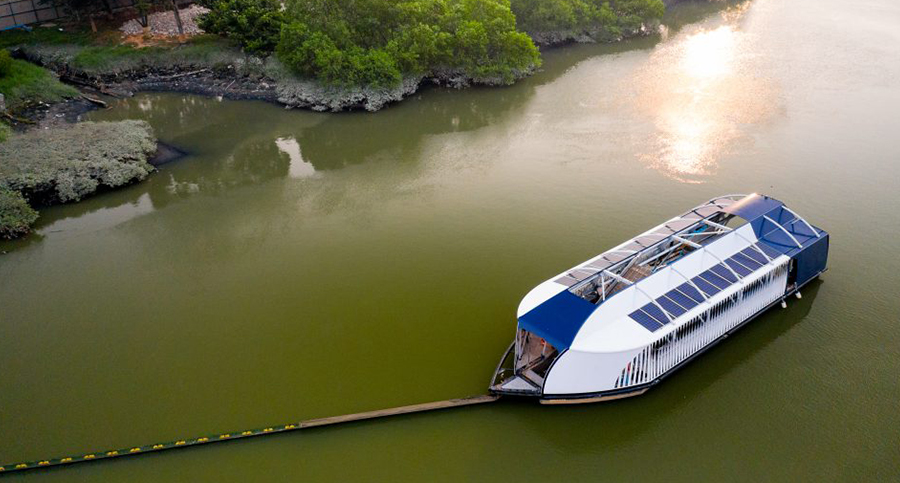 Continuing our innovation series, let’s look at a scalable and affordable solution that globally addresses our plastics in the ocean. Whilst there are several programs afloat (pardon the pun) to clean up and remove plastics from the major oceans of our world, there has been little attempt at resolving the root cause. With 1000 of the world’s major rivers accounting for 80% of our trash entering the ocean (see map here*), the push has been to deploy technologies to combat pollution by plastics before they get to the ocean. Major areas affected are South East Asia and the Indian sub-continent, Western Africa, Central America and the eastern seaboard of South America. Fortunately, Australia and the Pacific does not make the list.

Enter the Interceptor by OceanCleanup, as the world’s first scalable solution to intercept river plastic pollution. With four units built to date, and already having placed or in the process of being placed in Jakarta (Indonesia), Klang (Malaysia), on the Mekong Delta (Vietnam), Santo Domingo (Dominican Republic) and soon Bangkok (Thailand). Each unit is 100% solar-powered, able to operate unmanned, safely by day and night, and is remotely monitored. The units operate quietly and autonomously, through solar power or onboard lithium batteries. It uses a floating barrier to intercept and channel the plastic waste into its chute, however, it does not interfere with marine life nor any vessels using the waterways. Able to extract 50,000-100,000kg of garbage a day, it uses a series of floating bins to hold the debris which is routinely removed by a barge through an automated request system.

The non-profit OceanCleanup started as an idea in 2013 when a young Dutchman, Boyan Slat was scuba diving in Greece and surprised to see more plastics than fish in the ocean. Following a feasibility study and crowdfunding in 2014, further research, an expedition, and scale model testing, prototypes were built in 2016-2017 and an operational system launched in 2018. The aim is to systematically clean up 90% of the world’s oceans by deploying Interceptors in rivers and oceans worldwide. Their study identified five major zones or “garbage patches”, making this project the largest environmental rescue operation yet, able to retrieve as much as $500 million worth of plastics.

* Formerly, I have lived in Bangkok, Thailand; Cebu, and Manila, Philippines (with perhaps the most polluted rivers/oceans in the world), and find it revealing as to how accurate the map is.